Montgomery County was established by dividing Monroe County on December 6, 1816, by the Mississippi Territorial Legislature. It is named for Lemuel P. Montgomery, a young U.S. Army officer killed at the Battle of Horseshoe Bend, the final battle of the Creek Indian war, which was waged concurrently with the War of 1812. The city of Montgomery, which is the county seat, is named for Richard Montgomery, an American Revolutionary War general. Montgomery County is the home of The U.S.A.F. Air War College, and has several top notch universities within its boundaries including Huntingdon College, Faulkner University, Auburn University at Montgomery, and Alabama State University. As the Cradle of the Confederacy, there are many historical landmarks included in Montgomery county as well. These include The historic Selma to Montgomery civil right trail, and the Dexter Avenue Baptist Church. 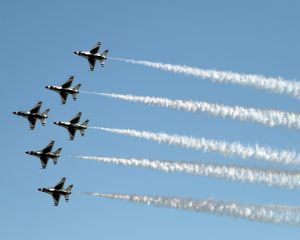 Join Air University and Maxwell Air Force Base as they celebrate the 75th anniversary end of WWII with the Beyond The Horizon Air & Space Show. This two day event will start on April 18th at 9:00 a.m. and on April 19th at 12:00 p.m.

This is a pop up player.