Autauga County was established on November 21, 1818, by an act of Alabama Territorial Legislature (one year before Alabama was admitted as a State). As established, the county included present-day Autauga County, as well as Elmore County and Chilton County. At the time, Autauga (aka, Tawasa) Indians lived here, primarily in a village named Atagi (meaning “pure water”) situated on the banks of a creek by the same name (called “Pearl Water Creek” by settlers). Autauga County has a population of 54,571 and the county seat is Prattville. Other towns in Autauga County include Autaugaville, Billingsley, Marbury Pine Level. Autauga County even has one ghost town called Washington which is located on the north bank of the Alabama River, just west of the mouth of Autauga Creek. 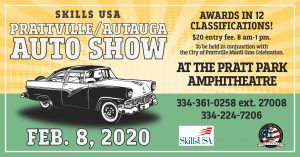 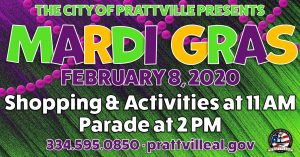 Join the City of Prattville for the annual Mardi Gras celebration. It will take place in downtown Prattville on February 8, 2020 starting at 11:00 a.m. and the parade starts at 2:00 p.m.

This is a pop up player.